back to all episodes
Episode 5
Listen 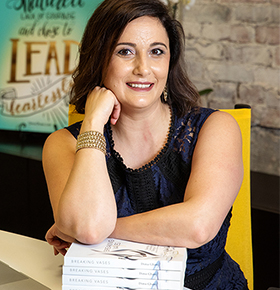 International Keynote Speaker and Executive Coach
Playing in her grandma’s kitchen back in her native Jordan at the age of five, Dima was told that girls were like vases. If vases ever cracked, they couldn’t be fixed and must be destroyed. Growing up with low self-esteem and eventually suffering from major depression in her twenties, she found herself stuck in an arranged but unfit marriage. It was time for change. She forced herself to question the horrible stories she was told as a child, packed her bags and ultimately changed her narrative. Three-time TEDx presenter and inspirational speaker, executive coach, and author of Breaking Vases, Dima Ghawi became her own savior and is now an inspirational voice for journeywomen and men worldwide.

International keynote speaker and executive coach, Dima Ghawi was raised in Jordan where she faced many hardships that prevented her from realizing her personal and professional dreams. Like many women living there at the time, she faced widespread political and cultural oppression that overlooked female participation and kept women either sequestered involuntarily in the home or disadvantaged in the workplace.